We support community economic development for our area's members, serving all individuals and organizations that reside and operate within the traditional home of the First Nations people who call this region “Mushkegowuk.”

Wakenagun CFDC is a federally incorporated not-for-profit Community Futures Development Corporation. We service all individuals and organizations that reside and operate within the traditional home of the First Nations people who call this region “Mushkegowuk.”

We support community economic development for our community members through: 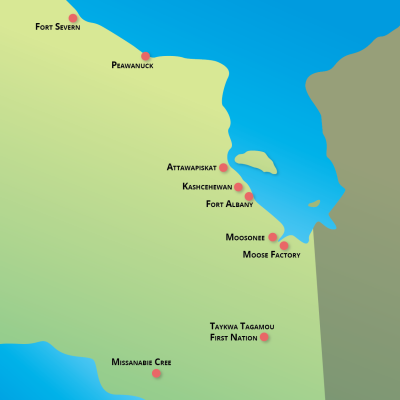 Our mission is to support community economic development for our community members through: 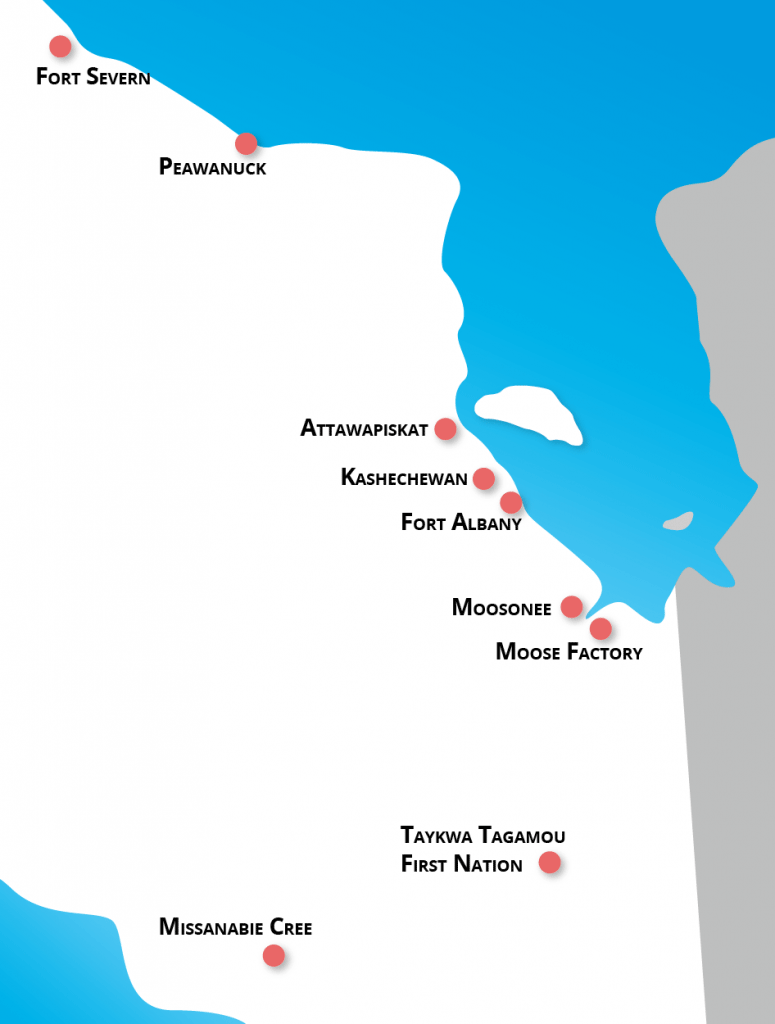 The community of Fort Albany is located in the district of Cochrane on the West coast of James Bay, Longitude 82 degrees west 45’ and latitude 53 degrees north 20’. The community is situated on Sinclair and Anderson’s Islands on the Albany River, and on the mainland. The community is 128 air km northwest of Moosonee.

The community of Kashechewan is located in the district of Kenora 81 degrees west longitude and 52 degrees north latitude. It is a First Nation of the Albany Reserve #67. The community is located on the northern shore of the Albany River, 10 km upstream from James Bay. An isolated community, the nearest urban centre is Timmins and it is located approximately 485 km south. [More]

The nearest community is Fort Albany and it is also a First Nation of the Albany Reserve #67. The distance between the two communities is approximately 12 km. The distance by air is five minutes, and one hour by boat.[Less]

The Missanabie Cree First Nation is a distinct group of the Mushkegowuk Cree whose traditional territory is centered in and around Missanabie Lake, Dog Lake, and Wabatongushi Lake. These were just some of the water systems we used.

Moosonee, located in the district of Cochrane, is situated at 80 degrees latitude N 35′ and longitude 51 degrees W 07′. The community is situated on the north side of the Moose River approximately 13 km inland on the West Coast of James Bay. Moosonee is Ontario’s only saltwater port. [More]

Referred to as the “Gateway to the North,” Moosonee is central to points north for both east and west coasts of James Bay. [Less]

Weenusk was once a trading post; therefore, the Cree families along the Weenusk River moved closer to the post because they had become dependent on the white man’s goods. The Scottish labourers that worked for the company took some Cree women as wives, so by the time when the Government Officials arrived for Treaty Nine, the Weenusk settlement was pretty much a mixed / Metis nation. From 1955-1965, the Canadian Government had built and stationed in fourteen radar bases along the Hudson Bay Coast. During this time the people of Weenusk were employed with the Canadian Military. On Friday May 16, 1986 approximately 11:30 a.m. eastern standard time, the village of Weenusk existence came to an end. Spring break-ups are spectacular things to see from nature, however, as a survivor of the Weenusk Flood, the sight is not pretty. The flood claimed two lives. That same year the Weenusk People relocated approximately 30 km up the river. A place known as “Peawanuck” became their new home. [Less]

The Taykwa Tagamou First Nation has a reserve located 14 km west of the Abitibi Canyon Hydro Generation Station between Cochrane and Moosonee. Due to the isolation of the reserve and lack of employment opportunities, the reserve was never occupied. [More]

We are a regional body that will support community economic development through assisting communities with economic analysis and strategic planning.